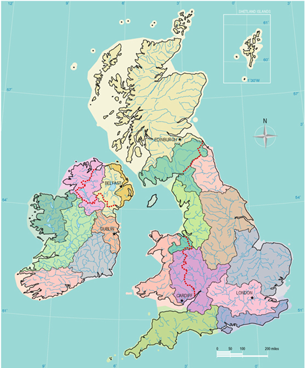 The EU Water Framework Directive requires all Member States to prepare River Basin Management Plans (RBMPs) and Programmes of Measures (PMs), designed to prevent deterioration of aquatic ecosystems and to achieve at least good ecological and chemical status1) for all surface waters within the basin by 2015, whenever possible. The main goals of the WFD apply to all rivers, lakes, estuaries and coastal waters. Groundwater should also achieve good status for both water quality and quantity.

Quick Guide to
River Basin Management Plans in the UK

RBM Plans are available for each River Basin District. Comments were invited by the Competent Authorities in each country as part of the public consultation and participation process required by the Directive. The consultation period ran from 22 December 2008 until 22 June 2009.

What were Competent Authorities asking for in the consultation?

Each Plan presented a set of consultation questions seeking views, comments and suggestions. The questions covered a range of issues, such as:

The comments received by the Competent Authority  were used during the development of the first River Basin Management Plans. In England and Wales these plans  were submitted to Ministers on 22 September 2009, and finally published on 22 December 2009.

Were there any responses to the draft plans?

Yes, the competent authorities have published for each RBD a report summarising how the consultation was organised, what were the main national and regional issues of concern, and identifying actions to be taken. Responses have been received from a range of sectors and co-deliverers, including  agriculture and rural land management, angling and conservation, industry manufacturers, mining and quarrying, local and regional government, navigation, recreation and sport, transport, water industry, central government and general public. The response documents are available for download on the Competent Authorities’ RBMPs web pages.

Aim of this quick Guide

The River Basin Management Plans necessarily contain a lot of detailed and useful information for interested parties, whether their interests are sectoral, regional or local. The aim of this Guide is to provide a summary of how the RBMPs were developed and what they contain, and to help the users quickly find the information they need.

How were the RBMPs developed?

How are the Plans structured?

The River Basin Management Plans all follow a similar format and the key information provided is to:

What do the RBMPs consist of and how can I find them?

The RBMPs are extensive sets of documents with numerous Annexes and interactive maps. You can find and download the Plans for England and Wales, Scotland and Ireland in our Key WFD Documents section:

Are there any variations specific to devolved administrations?

There are variations in the  Plans specifically related to the situation in the devolved administrations and these can be found by clicking on the countries below:

What about other Member States?

The deadline for publishing River Basin Management Plans (22.12.2009) and the deadline for reporting these plans to the Commission (22.3.2010) have expired.  There are however delays in some parts of the EU, and  the RBMPs have not yet been established. EC DG Environment website provides information on the current status of the RBMPs in Member States and gives extensive links to national central websites on the WFD implementation, to  individual national and international river basin districts and to key RBMP documents:

A Quick Guide to RBMPs in the UK