This call for evidence is part of the government’s Review of the Balance of Competencies between the UK and the EU. The Review will provide an informed and objective analysis of what EU membership means for the UK and our national interest.

The final report will examine the scope of the EU’s competence (power to act) for a common fisheries policy, for fisheries management and aquaculture, and how it is used and its effect on the UK. It will be based on evidence submitted during the 12 week call for evidence period from 21 October 2013 to 13 January 2014.

Defra are seeking the public’s views on whether Henleaze Lake and Shoreham Beach should be added to the list of bathing waters under the Bathing Water Directive (76/160/EEC, revised and updated by 2006/7/EC).

Each year Defra reviews the list of bathing waters in England. For the review of the 2014 list they have received applications from Adur and Worthing Councils and Henleaze Swimming Club for Henleaze Lake and Shoreham Beach to be designated as bathing waters.

This consultation will be of interest to the general public, water companies, swimming clubs and organisations, environmental non-governmental organizations (NGOs), and tourism organisations.

On 22 June the Environment Agency launched their ‘Challenges and Choices’ public consultation. This is asking ‘how do you think the water environment should be protected and improved for the benefit of communities, businesses and wildlife?’ Not only is the Agency asking what you consider to be the biggest challenges in your river basin district, they are also asking what you would choose to tackle first. The information will feed into the draft river basin management plans in 2014. The closing date for responses is 22 December 2013. A wealth of information on the water environment for each river basin district and at a more local catchment scale is available on the Agency’s website.

For further details and to find out how to respond, go to:
(http://www.environment-agency.gov.uk/research/planning/33252.aspx)

In addition to these regional consultations, there is a national (England) consultation on nationally significant issues and this is running for 3 months, from 22 June 2013 to 22 September 2013.

If you would like to respond to either the Western Wales or Dee River Basin District consultations, please visit the website for Natural Resources Wales at:
(http://naturalresourceswales.gov.uk/our-work/consultations/list-of-current-consultations/?lang=en)

Defra is starting work with environmental regulators (for example, the Environment Agency and Natural England) and other Government Departments on reforms to make it easier, quicker and clearer to understand what environmental rules apply and simpler to report essential environmental data. This will make it cheaper for businesses and others to comply with regulations and achieve strong environmental standards.

length of bathing season in england

Defra received 594 responses to the online survey and eight written or emailed responses from a range of respondents including water companies, local authorities, private beach and lake owners, swimming clubs, NGOs and individual members of the public. The majority (430) voted to extend the length of the bathing season.

In light of these responses, Defra will prepare an Impact Assessment and carry out a detailed consultation during the winter of 2013/14.

The fine weather over the summer resulted in all Scotland’s bathing waters achieving at least the mandatory standard with 47 also gaining the stricter guideline standard. This has been the first summer with no failures since 2006.

MP for Camborne, Redruth and Hayle, George Eustice has been appointed Parliamentary Under Secretary of State for Natural Environment, Water and Rural Affairs at Defra in the recent government cabinet reshuffle.

Dr Simon Festing has been appointed as the Chartered Institution of Water and Environmental Management’s new CEO. Drawing on a strong environmental background, he comes to CIWEM from his post as Chief Executive at the Society for General Microbiology. He will take up his appointment on 1 March 2014.

The Hydrological Outlook provides an insight into future hydrological conditions across the UK. Specifically it describes likely trajectories for river flows and groundwater levels on a monthly basis, with particular focus on the next three months.

Well established monitoring programmes provide the current status of both river flows and groundwater levels at many sites across the UK, and data from these programmes provide the starting point for the Outlook. A number of techniques are used to project forwards from the current state and results from these are used to produce a summary that includes a highlights map.

The Hydrological Outlook is produced in a collaboration led by NERC’s Centre for Ecology & Hydrology and involving the British Geological Survey, the EA, the Met Office, SEPA, Natural Resources Wales and the Rivers Agency Northern Ireland.

The UK Water Research and Innovation Partnership is composed of private, public and third sector bodies, convened to provide leadership and to facilitate co-ordination of water research and innovation initiatives concerned with UK and global water security.

Natural Resource Wales has announced a new approach to protecting water supplies when assessing the amount of water taken from Welsh rivers for electricity generation.

Agreed by the Natural Resources Wales Board, the approach will offer a clearer, more straightforward way of assessing the water available for sustainable hydropower consistently across Wales.

Hydropower schemes can cause lower water levels in rivers between the points where the water is taken out and where it is put back after passing through a turbine. River levels and day-to-day changes in the natural flow of a river are essential to protect important wildlife habitats for spawning fish and other species.

Alongside the new approach, Natural Resources Wales is also looking at more ways to help support the industry, as well as the community groups and landowners that could benefit from hydropower. 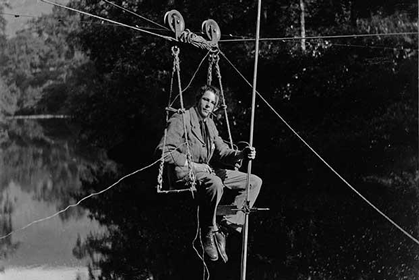 Along with the University of Dundee, Scotland celebrated 100 years of continuous river level monitoring recently.

Glenfield, a gauging station on the River Irvine in Kilmarnock, Ayrshire, is the first site in Scotland to reach the hydrological milestone and is one of the earliest monitoring sites in the UK.

The charts detailing information for the River Irvine date back to 1913 and have recently been lodged with the University of Dundee Archive Services.

The International River Foundation has awarded the inaugural European Riverprize to the River Rhine. The prize is worth €40,000 and is sponsored by Coca-Cola Europe.

The River Rhine received the award for remarkable achievements in integrated river basin management following a 50 year legacy of river degradation and a devastating chemical accident in 1986. The International Commission for the Protection of the Rhine and other stakeholders in the basin have successfully implemented urban wastewater management strategies and dramatically improved the water quality of the Rhine. Additionally, in the past 15 years, the adoption of new, integrated policies has resulted in the restoration of a substantial area of floodplains in the densely populated Rhine delta.

Following a comprehensive debate, and a considerable watering-down on environmental objectives, in particular on three priority substances (two hormone substances 17alpha-ethinylestradiol and 17beta-estradiol, and the widely used painkiller Diclofenac) the legislators agreed on the final version. It was published in the Official Journal on 24 August 2013 as “Directive 2013/39/EU of the European Parliament and of the Council of 12 August 2013 amending Directives 2000/60/EC and 2008/105/EC as regards priority substances in the field of water policy”.

….to speed up the transfer of water related research output to better implement the Water Directives.

Water RtoM aims to speed the transfer of outputs to practitioners, with a targeted time-lag down to 3-5 years, by adding a step between research and the existing technology transfer schemes to end-users. This is an EU LIFE project; the final workshop was held in June 2013.

As part of the 16th International River Symposium, seven organisations and projects, each with mandates to improve the management of transboundary water basins, announce the launch of the Global Network to advance integrated river basin management around the world. This effort will leverage resources and address the unprecedented, long-term challenges to viability of the world’s river basins in the 21st century.

The Freshwater Biological Association has begun their first oral history project ‘Clear Waters: an oral history of people’s understanding of fresh water’. A year-long project, funded by the Heritage Lottery Fund, it aims to record people’s memories of the freshwater bodies of the Lake District in the last 50-60 years.

Themes of particular interest, relating to where changes may have occurred, include reedbeds, blugreen algae, wildlife, fishing, weather and recreation. If you are interested in taking part in the project, please contact Faith Hillier, Project Officer on 015394 87720, fhillier@fba.org.uk .

An overview of groundwater contaminants in Europe is provided by a recent study, which calls for more integrated monitoring using a range of indicators. Groundwater contamination presents serious health and environmental concerns.

A number of Directives, including the Water Framework, Groundwater, Nitrates, Industrial Emissions and Landfill Directives, together aim to protect groundwater from pollution and deterioration. The study, supported by the EU’s GENESIS project, focuses on four pollutants (radionuclides, salt, nutrients and trace elements) which have both natural and human-based sources and three synthetic contaminants (pesticides, crude oil compounds and wastewater contaminants).

Nearly a third of the EU’s coastline has insufficient protection from erosion and flooding, according to recent research. The study presents a method for assessing coastal ecosystems’ capacity to provide vital protection from these threats, and highlights the need to protect key habitats which safeguard coastal resilience.

Constructed wetlands can regulate stormwater flows and improve water quality, helping humans to adapt to a changing climate. New research has now shown that, if carefully designed, they can also be used for climate change mitigation by storing carbon, while also providing biodiversity and cultural ecosystem services.

Constructed stormwater wetlands and ponds offer ecosystem services beyond water regulation, but these further benefits have never been fully examined. This study evaluates the carbon sequestration, biodiversity and cultural services of constructed wetlands, and identifies design features to optimise these benefits.

an economic case for restoring rivers and their ecosystem services

Restoring the natural conditions of rivers and streams by intentionally adding forest deadwood boosts key ecosystem services, new research suggests. By calculating the value of these services, the researchers were able to show that increasing the amount of deadwood in rivers and streams in a Basque Country reservoir basin was economically profitable and that returns on investment could be realised within 20 years.

brochure on water blueprint for europe

This is a biannual publication, produced and edited by Cefas (Centre for Environment, Fisheries and Aquaculture Science) scientists on behalf of Defra; it is a service to the British shellfish farming and harvesting industry.

water and the environment – fracking (6 November 2013)

The aim of this meeting was to explore and understand the implications of fracking on water, emissions, and the wider environment. It looked at the adequacy of the evidence base to help inform how regulation and mitigation measures might work in practice over the life cycle of production.

See the presentations at:
(http://www.ciwem.org/events/conference-outputs.aspx)

CIWEM is currently undertaking a more in-depth review of the water implications of fracking.

The aim of the day was to look at the issue of hydromorphology in the context of the Water Framework Directive and the developing programme of hydropower generation to understand policy drivers, technical insights e.g. flow regimes, and current thinking on the scale of issues posed and the practice that is developing to both improve the health of rivers as well as realise the potential energy provision from this source.

Talks included hydropower on the River Thames, protecting fish and fishing from hydropower, weir pools, and tackling the challenges of urban hydromorphology for WFD.