Scotland is divided into three main regions; the Highlands with its major cities of Aberdeen and Inverness, the Central Lowlands and the Southern Uplands.

Most of the population and the majority of Scotland's industry are located within the Central Lowlands which includes the major cities of Edinburgh, the capital of Scotland with a population of 450,000, Glasgow and Dundee.

It is relatively mountainous compared to the rest of the United Kingdom. The highest peak, Ben Nevis (1,356m) is the highest in the UK and it has five other mountains of more than 1200m.

It has 787 islands ranging from large rocks to land several hundred square miles in area. The largest and best known islands are those associated with Shetland and Orkney in the north-east, and Lewis, Harris, Skye, Mull and Islay in the Hebrides, and the islands of Bute and Arran in the Firth of Clyde.

About 130 of the Scottish islands are inhabited.

Despite its northern latitudes, the climate in Scotland is remarkably temperate. One of the main reasons is the influence of the warming effect of the Gulf Stream from the Southern Atlantic.

For a description of Scotland’s regional climates go to:
(https://www.metoffice.gov.uk/climate/uk/regional-climates)

The average annual rainfall in Scotland ranges from 624mm to over 4,000mm in parts of the Highlands. 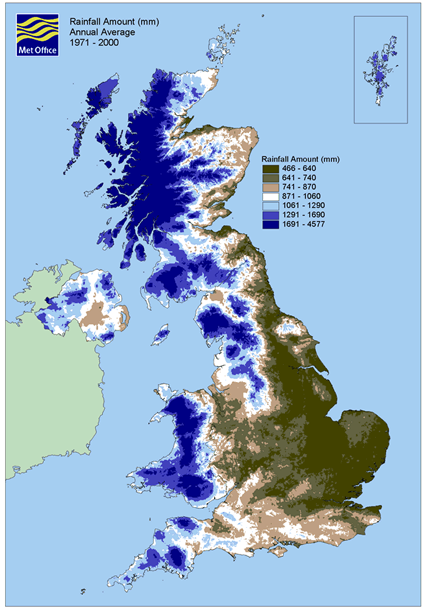