Groundwater is water that has drained through surface layers of soil and rock until it reaches a layer of rock material through which it cannot pass, or can pass only very slowly. This results in the accumulation of water in the rock layers above this impermeable layer. The water is stored in gaps in the rock, or between the particles of which the rock is composed. Rock which retains water in this way is called an aquifer.

Rock types which can hold water include chalk, limestone and sandstone. Rock types which do not hold water but can prevent water moving out of a permeable rock type include granite, basalt and mudstone. Groundwater supplies springs and wells and, when there has been a period with little rain, it is often groundwater that maintains flow in rivers rather than surface drainage from land.

About 35% of all public water supply in England and Wales comes from groundwater which has undergone treatment (Source: Environment Agency Facts and Figures). In more remote areas, where there is no public water supply, a household may take its water supply direct from groundwater via a borehole and use it with little or no treatment if the aquifer is of good quality. Industry and agriculture also abstract water directly from aquifers either because they cannot, or it is not convenient, to take water from the mains supply or because they do not need to use water of potable quality. 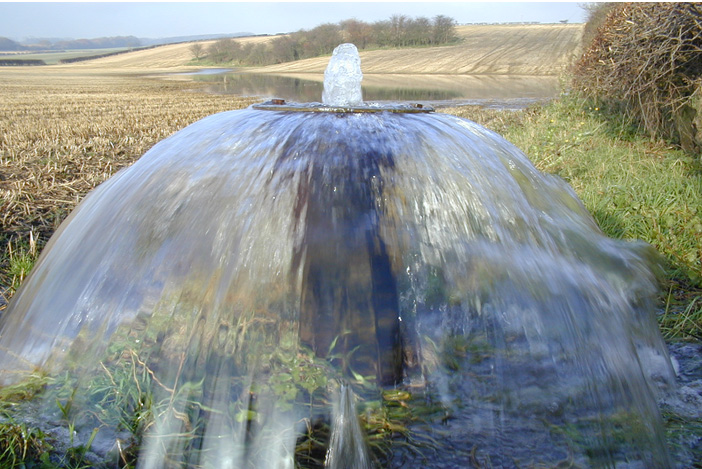 Photographed in the winter of 2000/01 during the period when rainfall and subsequent recharge to many aquifers in England exceeded previously recorded quantities.
As a result, groundwater levels rose to their highest recorded levels leading to extensive groundwater flooding mainly in the upper, normally dry valleys on the dip slope of  the Chalk escarpment.
At Tancred Pit borehole, water levels are between 7 and 10 metres below ground under normal conditions. In the background groundwater flooding of the dry valley (see crop pattern), as a result of the exceptionally high groundwater levels, can be seen.