The Hydrological Cycle
(also known as the water cycle) is the journey water takes as it circulates from the land to the sky and back again.

When the clouds meet cool air over land, precipitation (rain, sleet, or snow) is triggered, and water returns to the land (or sea). Some of the precipitation soaks into the ground. Some of the underground water is trapped between rock or clay layers - this is called groundwater. But most of the water flows downhill as runoff (above ground or underground), eventually returning to the seas as slightly salty water.

This Information page provides an understanding of the hydrological cycle. It describes the principal stages of the cycle, with a brief description of each stage. A diagram gives a clear visual explanation. The links between the hydrological cycle and the duties of a water utility to supply clean water and dispose of dirty water are also explained.

Links to other web pages allow the reader (particularly teachers and students) to supplement the information contained in this Information Note.

Where is all the Earth’s water?

Water is the most widespread substance to be found in the natural environment and it is the source of all life on earth. Water covers 70% of the earth’s surface but it is difficult to comprehend the total amount of water when we only see a small portion of it. The distribution of water throughout the earth is not uniform. Some places have far more rainfall than others.

There are many reasons for this, such as where the mountains are and where the prevailing winds blow. This rainfall distribution partly explains the differences in vegetation and why some areas are deserts and some are rainforests.

Water exists in three states: liquid, solid and invisible vapour. It forms the oceans, seas, lakes, rivers and the underground waters found in the top layers of the earth’s crust and soil cover. In a solid state, it exists as ice and snow cover in polar and alpine regions. A certain amount of water is contained in the air as water vapour, water droplets and ice crystals, as well as in the biosphere. Huge amounts of water are bound up in the composition of the different minerals of the earth’s crust and core. 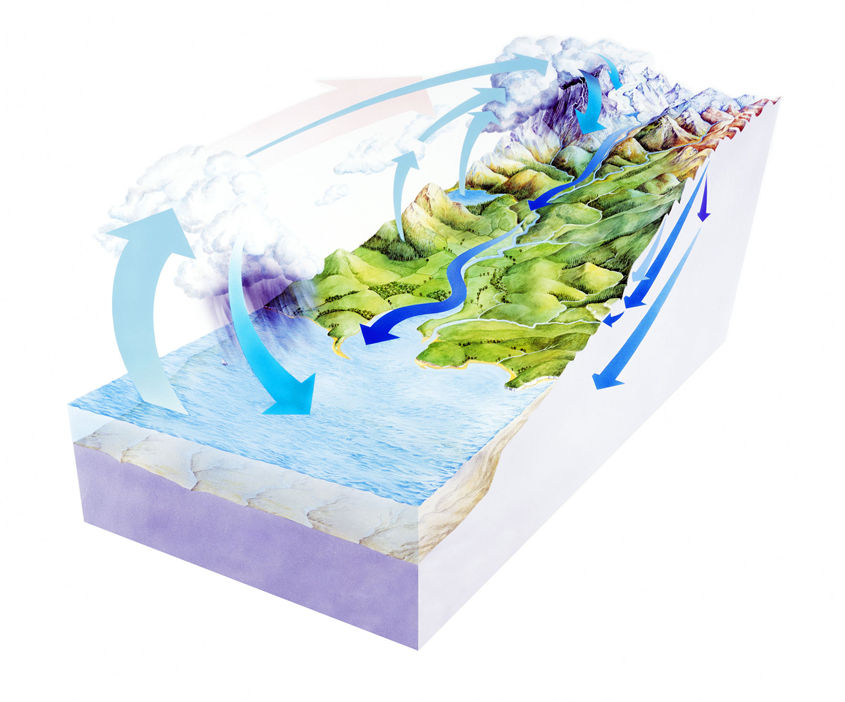 To assess the total water storage on the earth reliably is a complicated problem because water is so very dynamic. It is in permanent motion, constantly changing from liquid to solid or gaseous phase, and back again. The quantity of water found in the hydrosphere is the usual way of estimating the earth’s water. This is all the free water existing in liquid, solid or gaseous state in the atmosphere, on the Earth’s surface and in the crust down to a depth of 2000 metres. Current estimates are that the earth’s hydrosphere contains a huge amount of water - about 1386 million cubic kilometres. However, 97.5% of this amount exists as saline waters and only 2.5% as fresh water.

The greatest portion of the fresh water (68.7%) is in the form of ice and permanent snow cover in the Antarctic, the Arctic and in the mountainous regions. 29.9% exists as fresh groundwaters. Only 0.26% of the total amount of fresh water on the earth is concentrated in lakes, reservoirs and river system, where it is most easily accessible for our economic needs and absolutely vital for water ecosystems.

The values for stored water given above are for natural, static, water storage in the hydrosphere. It is the amount of water contained simultaneously, on average, over a long period of time, – in water bodies, aquifers and the atmosphere. For shorter time intervals such as a single year, a couple of seasons or a few months, the volume of water stored in the hydrosphere will vary as water exchanges take place between the oceans, land and the atmosphere.

What is the Hydrological Cycle?

The total amount of water on the earth and in its atmosphere does not change but the earth’s water is always in movement. Oceans, rivers, clouds and rain, all of which contain water, are in a frequent state of change and the motion of rain and flowing rivers transfers water in a never-ending cycle. This circulation and conservation of earth’s water as it circulates from the land to the sky and back again is called the ‘hydrological cycle’ or ‘water cycle’.

How does the Hydrological Cycle work?

The stages of the cycle are:

Water is transferred from the surface to the atmosphere through evaporation, the process by which water changes from a liquid to a gas. The sun’s heat provides energy to evaporate water from the earth’s surface. Land, lakes, rivers and oceans send up a steady stream of water vapour and plants also lose water to the air (transpiration).

Approximately 80% of all evaporation is from the oceans, with the remaining 20% coming from inland water and vegetation.

The movement of water through the atmosphere, specifically from over the oceans to over land, is called transport. Some of the earth’s moisture transport is visible as clouds, which themselves consist of ice crystals and/or tiny water droplets.

Clouds are propelled from one place to another by either the jet stream, surface-based circulations like land and sea breezes or other mechanisms. However, a typical cloud 1 km thick contains only enough water for a millimetre of rainfall, whereas the amount of moisture in the atmosphere is usually 10-50 times greater than this.

The primary mechanism for transporting water from the atmosphere to the surface of the earth is precipitation.

When the clouds meet cool air over land, precipitation, in the form of rain, sleet or snow, is triggered and water returns to the land (or sea). A proportion of atmospheric precipitation evaporates.

Some of the precipitation soaks into the ground and this is the main source of the formation of the waters found on land - rivers, lakes, groundwater and glaciers.

Some of the underground water is trapped between rock or clay layers - this is called groundwater. Water that infiltrates the soil flows downward until it encounters impermeable rock and then travels laterally. The locations where water moves laterally are called ‘aquifers’. Groundwater returns to the surface through these aquifers, which empty into lakes, rivers and the oceans.

Most of the water which returns to land flows downhill as run-off. Some of it penetrates and charges groundwater while the rest, as river flow, returns to the oceans where it evaporates. As the amount of groundwater increases or decreases, the water table rises or falls accordingly. When the entire area below the ground is saturated, flooding occurs because all subsequent precipitation is forced to remain on the surface.

Different surfaces hold different amounts of water and absorb water at different rates. As a surface becomes less permeable, an increasing amount of water remains on the surface, creating a greater potential for flooding. Flooding is very common during winter and early spring because frozen ground has no permeability, causing most rainwater and meltwater to become run-off.

This entire process repeats as illustrated in Figure 1.

Figure 1.
The stages of the Hydrological Cycle. 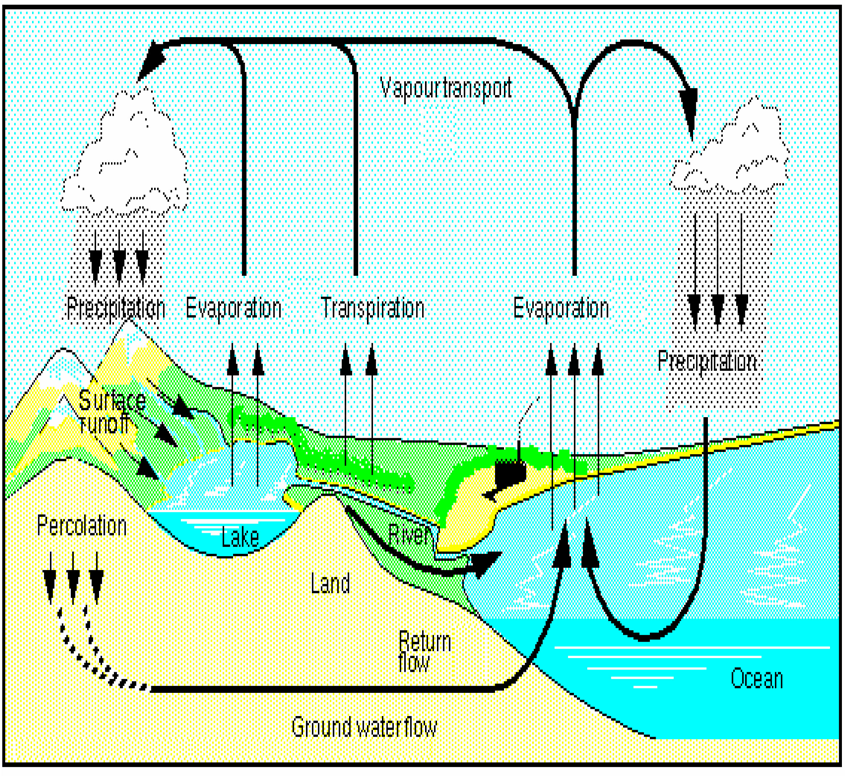 A considerable portion of river flow does not reach the ocean, having evaporated those areas with no natural surface run-off channels. On the other hand, some groundwater bypasses river systems altogether and goes directly to the ocean or evaporates.

More information on the volumes of global water and freshwater can be found at:
https://water.usgs.gov/edu/earthhowmuch.html

How does Water Supply and Sewage Disposal fit into the Hydrological Cycle?

We have seen that water flows into rivers, lakes and into groundwater storage. Most importantly, for our daily water needs, it also flows into our homes and taps. A network of underground pipes, pumping stations and treatment works ensures that clean, fresh drinking water is delivered by our local water utility to our homes every day of the week. After water has been used, the water utility collects, transports and then cleans this dirty water and returns it safely back into rivers where it can continue its journey downstream to the sea.

Figure 2 illustrates the water utility’s role in the hydrological cycle.

Figure 2.
The Water Utility’s Role in the Hydrological (Water) Cycle. 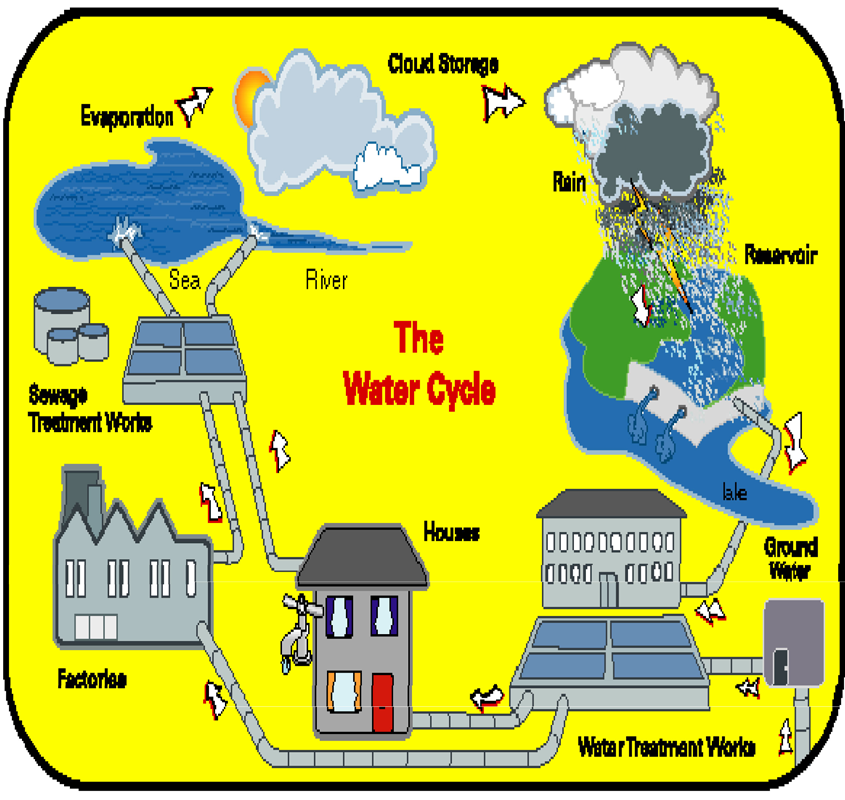 Rainwater takes the quickest route to the sea and flows into rivers, streams, lakes and aquifers. The water in the surface waters is clean enough to support a variety of wildlife, but it is not safe to drink and needs to be treated in a water treatment works to remove any harmful substances.

Water is abstracted from underground sources via boreholes or alternatively is pumped from rivers and stored in reservoirs before being passed through sand filter beds which trap any dirt and organisms. It is then treated using the most up to date advanced water treatment (AWT) technology such as ozonation and carbon filtration (granular activated carbon) which remove the substances that we cannot see.

(Note however that a large proportion of groundwater receives chlorination only and many surface water sources do not need AWT and use only coagulation/sedimentation/filtration.)

Clean, fresh drinking water is pumped into an underground network of pipes and storage reservoirs and is not seen again until it reaches your tap. This guarantees that the water you drink remains clean and fresh.

On average, in European countries, each person uses around 150 litres (33 gallons) of water every day. Baths, showers, washing up, washing clothes and toilet flushing all use large amounts of water. These activities transform clean tap water into dirty wastewater. The water utility not only supplies clean drinking water but also collects, transports and disposes of the dirty water after it has been used.

Dirty water or sewage is collected firstly in drains and then in underground sewers and is transported via a sewerage system (a network of pipes and tunnels) to a sewage treatment works.

These works use natural micro-organisms to remove harmful substances from dirty water. The solid material (sludge) is separated from the liquid (effluent) and both are treated to produce clean effluent that can be released back to the river and bio-solids that can be used in agriculture as a fertiliser or incinerated to produce energy.

Use as a fertiliser completes nutrient cycles and replenishes soil organic matter and sequestered carbon. The majority of sludge is treated by anaerobic digestion (AD), which produces biogas renewable energy.

The river continues its journey back to the sea where the cycle starts again. Water evaporates to form clouds, condenses to droplets and eventually falls as rain on to the ground.

There are a number of other websites which are of interest to students and teachers and which contain animated diagrams or slide shows for each stage of the hydrological cycle:

Water Cycle
The Earth’s total water supply is estimated to be over 1.3 billion cubic kilometres. It is constantly redistributed by a variety of processes. Water evaporates from the ocean and may fall as precipitation over land. Water re-entres the atmosphere from land by evaporation and transpiration (water loss by plants).

Water flows from land to ocean in surface
and streams. It also travels through soil and
rock as groundwater. There is 30 times as much fresh
water below ground than in lakes, rivers and inland seas.