There are variations in the Plans specifically related to the situation in the devolved administrations and these can be found by clicking on the countries below: 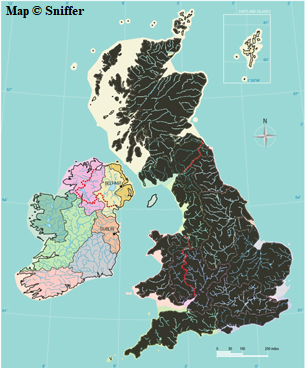 The draft Plans for the three RBDs within Northern Ireland have been developed by NIEA, Northern Ireland Environment Agency with a wide range of interested organisations, working together in a Water Framework Directive Stakeholder Forum and in Catchment Stakeholder Groups. Further information on the development of the plans can be found on the NIEA website:

The Plans for the RBDs in Northern Ireland have been developed in cooperation between local authorities within each RBD, River Basin District Advisory Councils (RBDAC), the Environment Agency and, for the IRBDs, the NIEA.

The Plans for the RBDs have three components:

Reports assessing the impacts of the plan and the measures proposed have been produced for each RBD.

The main pressures and issues for those waters in Northern Ireland not achieving good status or better were identified to be:

A programme of measures to deliver these objectives has been drawn up, taking into account the range of existing and planned measures as well as identifying supplementary measures that are required to be put in place. The measures will be applied at a local level depending on the reasons identified for not achieving good status. Information leaflets have been produced for 26 Local Management Areas (LMA), across the Neagh Bann, North Western and North Eastern Districts. The LMA Information leaflets are available  for download  on the Working Together sections of the RBMPs, accessible from the NIEA website: