Wastewater from households and industry, commonly together with water runoff from urban areas, is conveyed by the sewerage system to sewage treatment plants for safe and economic treatment of sewage, and treatment and disposal of the resulting sludge.

Mains water supplied to households is used for many purposes, other than drinking and food preparation, notably bathing and showering, toilet flushing and the washing of utensils, dishes and clothes. Except where main drainage is not installed, the used water gravitates to the local sewer and becomes ‘sewage’.

Domestic wastewater will contain both solid and dissolved pollutants including faecal matter, paper, urine, sanitary items, food residues and a variety of other contaminants. The sewer network will usually also receive wastewaters from office and commercial properties and from industrial premises. Rainwater from roofs and roads may also drain into the sewer network.

The combined flow from these various sources travels through the sewer system and ultimately to a ‘sewage works’ where it receives treatment before discharge of the treated effluent to a stream, river, estuary or the sea.

Collecting and treating wastewater has been even more beneficial to human health than the health service because it stopped water-borne diseases such as cholera and typhoid.

Why do we need to treat Sewage?

Treatment of sewage is essential to ensure that the receiving water into which the effluent is ultimately discharged is not significantly polluted. However, the degree of treatment required will vary according to the type of receiving water. Thus, a very high degree of treatment will be required if the effluent discharges to a fishery or upstream of an abstraction point for water supply. A lower level of treatment may be acceptable for discharges to coastal waters where there is rapid dilution and dispersion.

What does Sewage Treatment involve?

Large solids (plastics, rag, toilet paper residues) are removed first by mechanical screens. Traditionally, screening was used to remove only large solid material (> 25-30mm) in order to protect downstream operations. Nowadays, much finer screens (6mm mesh) are commonly employed to remove smaller inert solids. The material retained (‘screenings’) is usually washed to remove faecal matter and then compressed for disposal to landfill or to an incinerator. 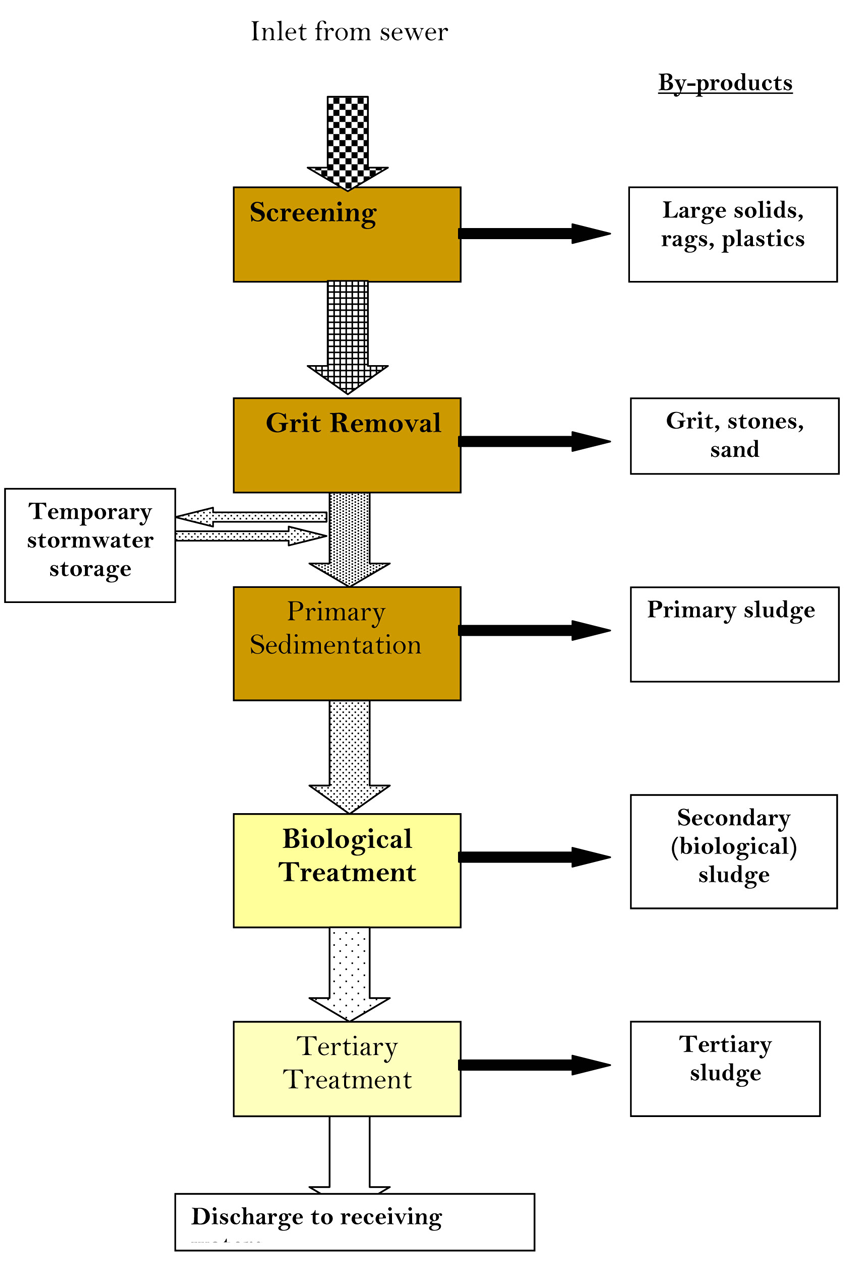 At the next preliminary stage, fine mineral matter (grit and sand), originating mainly from road runoff, is allowed to deposit in long channels or circular traps. The retained solids are removed and usually sent to landfill for disposal.

At times of rainstorms, the flow of sewage into the works may be too high to be accommodated by the downstream treatment stages. In these circumstances, some of the flow may be diverted at this point to storm tanks where it is stored temporarily before returning it for treatment when the flow subsides.

At times of rainstorms, the flow of sewage into the works may be too high to be accommodated by the downstream treatment stages. In these circumstances, some of the flow may be diverted at this point to storm tanks where it is stored temporarily before returning it for treatment when the flow subsides. In extreme rainfall events an overflow of effluent from the storm tanks may pass directly to a watercourse.

The sewage passes into large sedimentation tanks to provide a quiescent settlement period of about 8 hours. Most of the solids settle to the bottom of the tanks and form a watery sludge, known as ‘primary sludge’, which is removed for separate treatment. The sewage remaining after settlement has taken place is known as ‘settled sewage’.

Settled sewage then flows to an aerobic biological treatment stage where it comes into contact with micro-organisms which remove and oxidise most of the remaining organic pollutants.

At smaller works, the biological stage often takes the form of a packed bed of graded mineral media through which the sewage trickles and on the surfaces of which the micro-organisms grow. At most larger works, the sewage is mixed for several hours with an aerated suspension of flocs of micro-organisms (known as the activated sludge process). As well as removing most of the polluting organic matter, modern biological treatment can, where necessary, remove much of the nitrogen and phosphorus in the sewage, thus reducing the nutrient load on the receiving waters.

In circumstances where the highest quality of effluent is required, a third (tertiary) stage of treatment can be used to remove most the remaining suspended organic matter from the effluent before it is discharged to a watercourse. Tertiary treatment is effected by sand filters, mechanical filtration or by passing the effluent through a constructed wetland such as a reed bed or grass plot.

Why do we treat sludge?

All methods of sewage treatment generate organic sludges (or ‘biosolids’) as by-products and these must be managed separately from the liquid sewage (Reference 2). Raw (untreated) sludges have a very high oxygen demand and must not be allowed to enter the water environment.

All methods of sewage treatment generate organic sludges (or ‘biosolids’) as by-products and these must be managed separately from the liquid sewage (Reference 2). Raw (untreated) sludges have a very high oxygen demand and must not be allowed to enter the water environment. Sludge also contains pathogenic organisms.

There is, therefore, a need to deal with them in a way that permits their ultimate disposal in an environmentally acceptable and sustainable manner. The sludge ‘route’ selected for a given sewage treatment works will depend on several factors including its location, the availability of suitable farm land, the characteristics of the sludge and the overall cost.

What does a typical sludge contain?

Sludges produced by sewage treatment are organic in nature and contain useful amounts of plant nutrients such as nitrogen, phosphorus and essential trace elements.

Therefore, the first objective should be to utilise the sludge as a fertiliser or soil conditioner on agricultural land. In fact, some 60 per cent of the sludge produced in the UK is (after appropriate processing) recycled to farms. Agricultural use of sludge is regulated by government controls and by codes of practice designed to protect the quality of the soil, its crops and the health of human and animal consumers of such crops (References 3 and 4).

The location of some sewage works is unsuitable for the sludges they produce to be used in agriculture (e.g. not enough farmland or too much manure from farm animals) and for these the most frequent ‘route’ is incineration with landfilling of the ash. Landfill is an alternative but sludge is seldom landfilled in the UK. Either of these options is regulated strictly in the UK to minimise environmental impact. While these two options account for most of the remaining 40 per cent of UK sludges, there are also other minor uses for sludge, for example as a garden fertiliser, to make compost or as a fertiliser for crops which are subsequently used as fuel at power generating stations.

In their initial form, most raw (untreated) sludges have a high water content (96-99%), are putrescent and have an offensive odour. They will also contain a variety of human and animal pathogens derived from the contributing population.

Various forms of treatment may be used to achieve volume reduction by removing some of the water content. Odour and pathogen reduction is achieved by stabilisation and disinfection processes. In recent years, the control of odour emissions to the atmosphere has become an important requirement of sludge treatment.

The following outlines the more common types of sludge treatment employed, of which various combinations are used according to the end product required.

As a first stage of treatment, sludge is passed through stirred tanks or subjected to centrifugation to reduce its water content and volume by up to 50 per cent. The separated liquor is returned to the sewage flow for treatment and the consolidated sludge passes forward for further processing.

Anaerobic digestion (AD) has been practised for more than 150 years. It is not new but still has huge unrealised potential if regulations did not inhibit co-digestion of wastes. In this process, consolidated liquid sludge is retained in an airtight tank (digester) and maintained at 35 deg. C for 12-20 days. Under the anaerobic conditions in the tank, various pathogens break down about half of the sludge organic matter and convert it into a gas containing about 65 per cent methane.

The gas is used to heat the digester and, in some cases, also to fuel gas engines to generate electricity. The sludge resulting from anaerobic digestion is much less offensive in odour than the untreated raw sludge and, with certain restrictions (Reference 2), is generally suitable for use in agriculture in liquid or solid form. Further consolidation of sludge after digestion, to reduce its volume, is a common practice.

Either untreated or digested sludge may be converted from a liquid to a sludge ‘cake’ by treating it first with a conditioning chemical which releases much of the water initially bound to the organic matter. Much of the free water is then removed from the sludge in a filter press, a belt filter or a centrifuge. The resultant sludge cake will have only 20 per cent of the volume and weight of the original sludge, thereby reducing subsequent handling and transport costs. The conversion of sludge to a solid form is essential prior to its disposal to landfill.

This involves the burning of sludge at 850-900 deg. C to destroy its organic content and to leave a smaller residue of mineral ash for final disposal, usually to landfill. Incineration is only suitable for large sewage works and is used when the option of agricultural use of the sludge is not practicable. The process is carried out under closely controlled conditions and is subject to strict environmental regulation (the EU Waste Incineration Directive) to ensure that ambient air quality is not compromised by the combustion gases.

Some sewage works in the UK employ thermal drying systems to convert the sludge to pelletised or granular form comprising about 90 per cent solids. The heating involved also destroys pathogens. Thermally-dried sludges are used in agriculture or for amenity uses (for example, golf courses, parks and other amenity areas).

To destroy all pathogens in liquid sludge, it is heated to about 70 deg.C for at least 30, minutes after which it is cooled and subjected to anaerobic digestion. This combination of pasteurisation and digestion produces an ‘enhanced treated’ product (Reference 4) which enables it to be used more widely for various agricultural purposes.

At some smaller works, lime is added to liquid sludge to raise its pH to above 12.0 for several hours. The high alkalinity improves its odour and eliminates pathogens.

A few sewage works compost sludge by the process of ‘windrowing’. The process generates heat and a rise in temperature in the composting material causes pathogen destruction. The final product may be suitable for amenity use.

Figure 2
This diagram shows a typical sludge treatment sequence for production of an ‘enhanced treated’ sludge (biosolids) for use as fertiliser in agriculture. Many other options are possible in practice 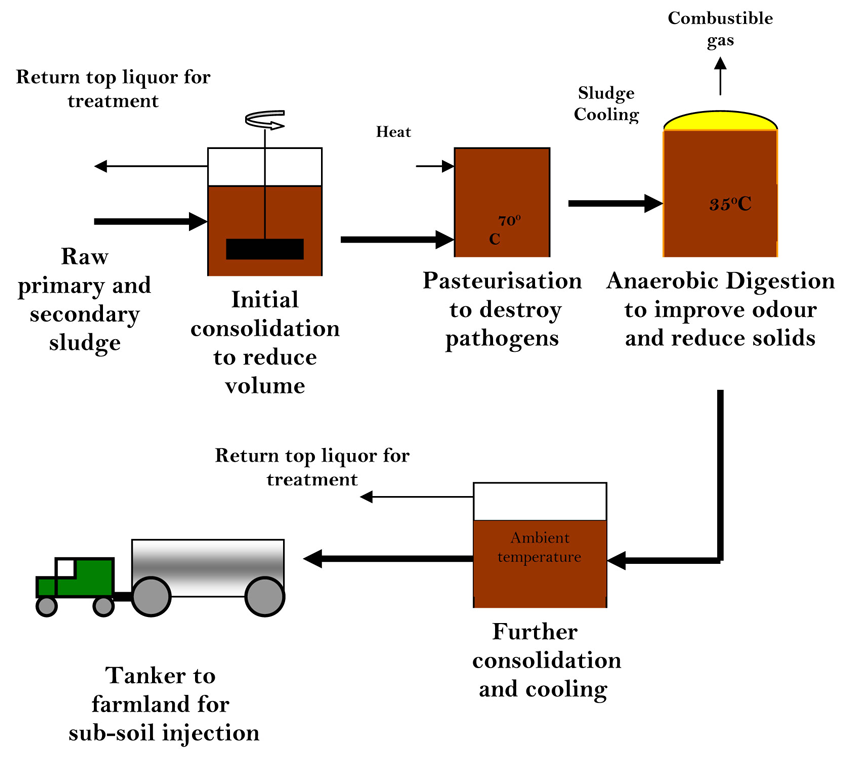 The latest code of practice for sewage sludge in agriculture is available on the GOV.UK website:

Sewage sludge in agriculture: code of practice for England, Wales and Northern Ireland – 23 May 2018

The code tells you: